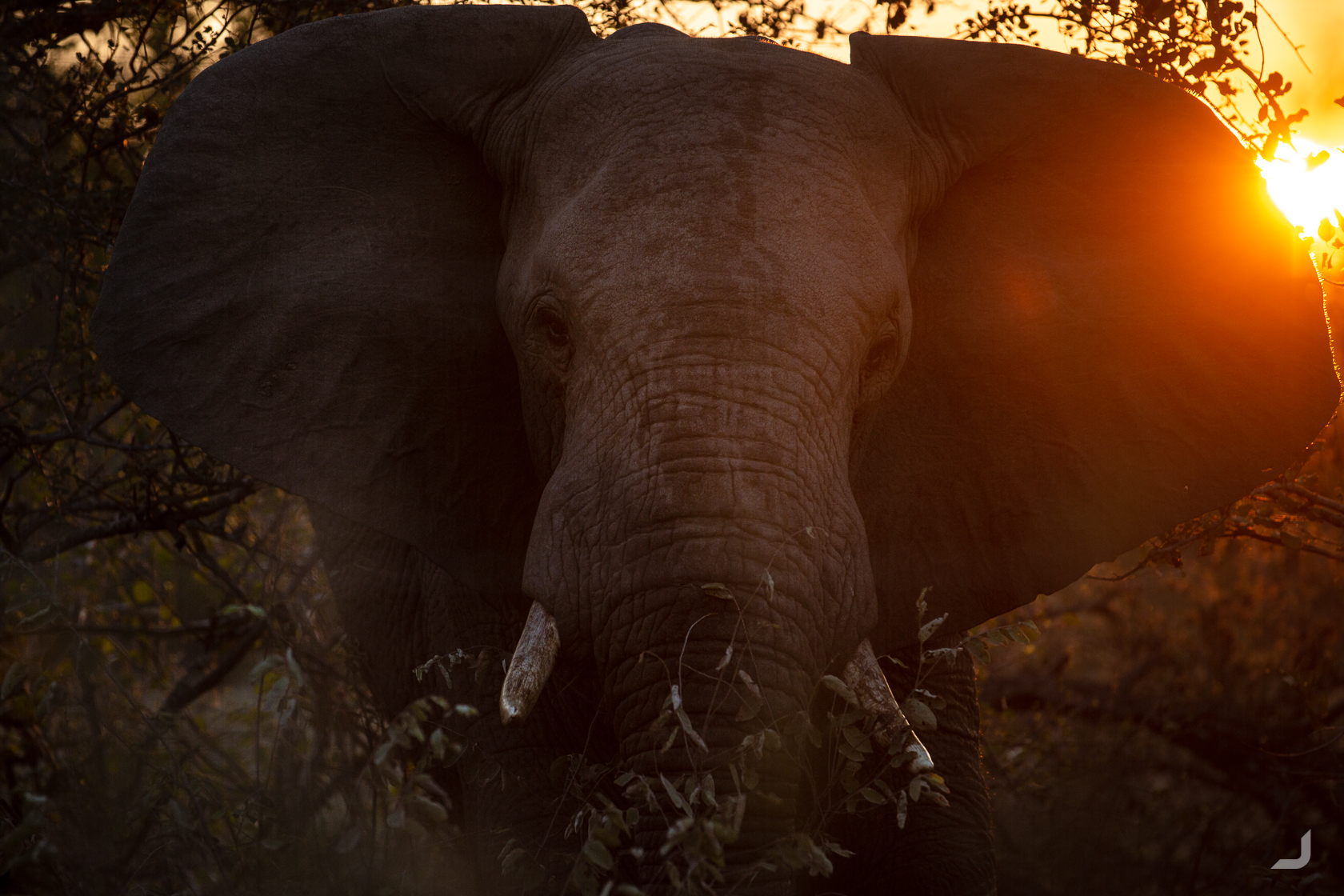 In July 2006, I departed on my very first solo trip outside of the Netherlands to work as a volunteer at Campfire Safaris in Balule Nature Reserve in the north of South Africa. The reserve is contiguous to Kruger National Park but animals can travel freely as there are no fences to seperate the two areas.

The work consisted mostly of bush work: finding and removing traps laid by poachers, fixing road erosion and keeping the fences clear from overgrowing bushes. Laetitia Cronje, the head of the program, treated us as students as well and took every opportunity to teach us all about the savannah inside and outside the classroom by going on daily bush walks.

The time flew by and the many first time ever experiences, often experienced with other volunteers from all over the world, in an environment surrounded by nature and wild animals underneath a red African sun, slowly making room for billions of stars, awoke every single cell in my body. When it was time to say goodbye, Laetitia made me promise to come back. How could I not?

Since then, I’ve always looked for opportunities of how I could make this possible. Little did I know that it would take me 16 years to gather the time and money required.

It was a somewhat nostalgic and happy but also sad mix of things that had stayed the same and things that hadn’t. Tinus, Laetitia’s dad who had built the entire compound, was no longer with us. Laetitia’s sons were now involved in the operations and one of them, Chris, would soon take over running the programs. Campfire Safaris was now called Campfire Academy and had shifted its focus completely from volunteering to teaching students.

I was allocated the very same rondawel as where I had stayed 16 years ago. The tower in the centre of the camp was still overlooking the savannah and so were the monkeys trying to steel our food. The fridge would testify with deeply engraved scratched caused by troops of baboons up to no good.

To make my return to the camp even more complete, I was greeted by two African elephants chilling only a few meters away.

An African elephant approaches the camp at Balule Nature Reserve in South Africa.

The first one of such drives was at Kapama Private Game Reserve, an extremely well organised game reserve and lodge just a little south from Balule.

A pair of young lions play in the late afternoon at Kapama Game Reserve, South Africa.

Lions are extremely social creatures and are witnessed playing and cuddling in the later afternoon at Kapama Game Reserve in South Africa.

A grey go-away bird poses on a branch at Kapama Game Reserve in South Africa.

At the end of my second week I rented a car and drove west to the most northern end of the famous Drakensberg. It’s part of a steep rift of valley walls that travels throughout the entire country of South Africa.

It is home to the Blyde River Canyon, which is the largest “green” canyon in the world. It stretches about 26 km long.

The Blyde River Canyon (“Blyde” means “happy” in old Dutch) from above. The Three Rondavels are located in the top right.

An acacia tree at sunset near the Blyde River Canyon.

The southern part of the Blyde River Canyon from above at sunset.

After the sun had set, a total darkness had blanketed the R527 towards Hoedspruit. Driving back on this road was one of the scariest things I’ve ever had to do in my life. It was pitch black, people have their own interpretation of speed limits, turning on headlights is optional and overtaking cars on the other side of the road could not care less whether there is incoming traffic or not.

I had to hit the emergency breaks to a stand still twice in order not to drive into an incoming overtaking car. With the second car, it was only at the last minute that I could see it rapidly approach because the lights of a truck behind it created its silhouette. It did not have any lights turned on. I beeped like there was no tomorrow, which probable made them think that I was the crazy driver.

Kruger National Park is only a couple of kilometres away from the Balule Game Reserve and it is one of South Africa’s largest, oldest and most famous game reserves. All of Africa’s big five (lion, leopard, black rhinoceros, African bush elephant and the African buffalo) roam these lands.

A zebra faces the opposite way in a dazzle of multiple zebras. That’s right, a dazzle of zebras.

The southern yellow-billed hornbill, or Zazu’s distant cousin from the Lion King (he’s got a red bill).

Flap necked chameleon crossing the road while looking backwards at the camera. It rocks back and forward, mimicking the way that leaves move in a breeze. This reduces the chance of predators seeing them as they move.

A lilac-breasted roller surveying the area for prey.

A close-up of a tusk of an elephant that is walking right past our car. Tusks are used for digging, lifting objects, gathering food, stripping bark from trees and defence. In contrast to rhino horns, tusks do not grow back.

An African elephant takes a look inside our car. Elephants have long eyelashes that help them stay clear from blowing sand, dirt and other debris. Their wrinkly skin surface retains five to 10 times more water than if it were smooth, which helps to keep the elephant cool as the moisture (from mud or rain) evaporates from the cracks.

Back at Campfire Academy

Officially, you’d need to be trained to know how to deal with hungry lions and temperamental buffalos while going for a stroll outside of the camp. Even more officially, you’d have to carry a gun (and know how to use it). I wasn’t and I didn’t, so spending some hours behind a “fence” followed. Saying “fence”, because it is not really a fence. It is more like two tiny electrical wires. It won’t stop the lions and leopards but it should keep the larger animals such as elephants and rhinos at bay. “Ellies”, especially, like to destroy things. Laetitia is working on proving that this is a good thing, as pushed down trees create tiny little brand new ecosystems and are moved around even more by elephants later.

During my last two weeks, a new group of students joined the camp to start their new adventure as aspirational future field guides. It meant that I could join them on their bush walks and classes and coincidentally, it was Laetitia’s last group of students before her retirement.

A twig snout bug (or Zanna) passed us by on a bush walk. It is a small genus of Lantern Bugs.

A kudu in Mopani on one of Laetitia’s assessment drives for the Khaya Ndlovu Manor House.

An African elephants peeks through the bush in Mopani, South Africa.

A partial rainbow forms in the sky above the bush in Mopani.

Staying closely together, the elephants slowly moved from one tree to the next.

One of them suddenly disliked my presence and charged straight ahead. As I was right at the edge of the camp, I froze and put all my faith in two electrical wires located in between the elephant and me. At several meters away, the charge halted and two giant ears waved forward.

Back in 2006, the closest I had come to seeing a lion in the wild was by spotting an antlion. These tiny insects dig a pit in the sand and patiently wait for an ant or some other prey to fall in.

This time, we heard them growl nearly every night. On my second last morning, one of the camp residents pulled over in her ute yelling “in the car, 5 min”. I quickly ran to my hut to get my camera and jumped in the car. It only took about 5 minutes before we ran into a pride of about 8 lions casually walking alongside a wet area close to the camp that we call the “dam”.

A young male lion passes a female in the early morning at only a stone throw distance to our camp.

A young male lion on the lookout.

The lions in this pride are related and locals are hoping that two nearby adults lions will soon chase the young males out to take over the pride. This will prevent them from interbreeding.

A young male lion looks back before coming our way.

A young male lion, on his way towards the side of our car.

A young male lion curiously takes a peek into our car.

A close-up of a young male lion at Balule.

Just as I looked outside of the car window there was a lion passing only a couple of centimetres in front of my lens.

A close-up of a lioness at Balule.

A close-up of a lioness walking towards us at Balule.

A lioness slowly walks towards us while looking in the distance.

A steenbok, only a couple of minutes drive away from the lions.

The setting sun taken from the tower at the camp on my last evening at Campfire Academy.

What to expect from a place that has a legendary status in the mind of someone who hadn’t been to the same place in so many years? It is perhaps difficult for the African savannah to disappoint any visitor at any time, but there is one constant that always remains paramount: the people you meet. They can make or break almost any place.

Laetitia has since retired and has shifted her focus on training locals who could otherwise not afford it. Her knowledge, humour and kindness are unrivalled and she will always have a legendary status in my mind.

Thank you Laetitia, Suegnette, Adele, Ed, Chris, Brass, Karen, Mach, Carlos, Elsabé, Abs, Will, Beth and Mukateki. It wouldn’t have been the same without you and I wish nothing but the best for your awesome selves. Until we meet again.