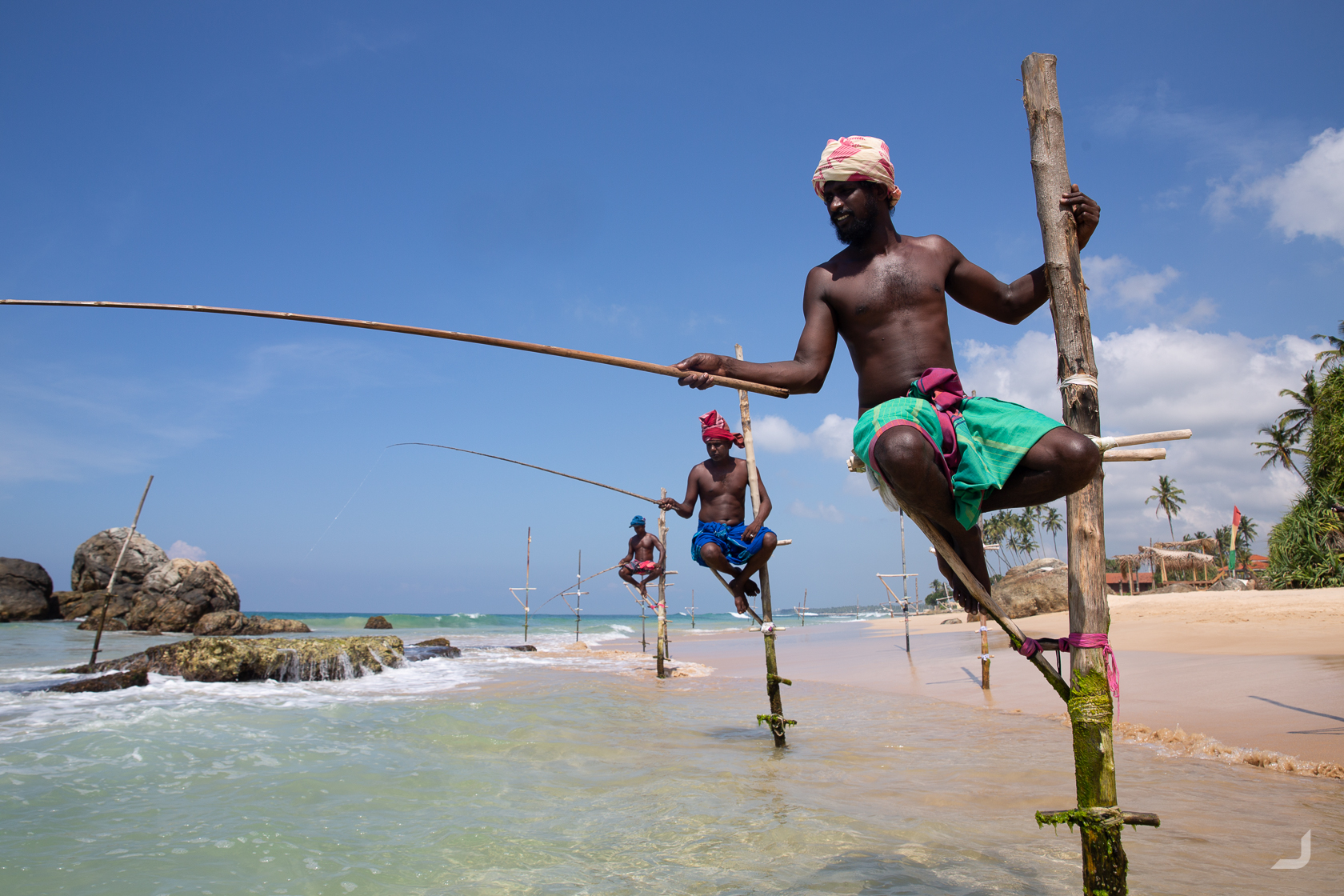 Right after Sri Lanka had won the spreadsheet battle of possible places to visit, I booked a flight to their capital, Colombo. I had two and a half weeks, as I was on my way home (for the first time in 4.5 years) and had to make it back in time for my mum’s birthday.

One itinerary in the Lonely Planet seemed to work perfectly for the time I had. It went horizontally from Colombo in the south west to Arugam Bay in the south east in just two weeks.

For the first few days in Colombo, I picked a few places on the map to walk to but it quickly became evident that the distances were quite a bit larger and the temperature was quite a bit hotter than anticipated. A couple of minutes of sunshine was all it took to make my t-shirt drenched in sweat.

It also didn’t seem very easy at first, for me anyway, to find good and affordable places to eat or to figure out how to get to the next town. There were no ticket offices at the bus terminal and I just had to ask other waiting passengers. It turned out that the only way to get to my next destination, a town called Nallathanniya (near Adam’s Peak, famous amongst Buddhist pilgrims), was to show up at the bus terminal in the morning, ask people again to find the right stop, then hope that a bus would show up soon and then after it had finally arrived, hope that it will depart soon. Luckily, it worked. The next day, I left the hotel at 7.30am and arrived in Nallathanniya (about 150km away) via a transfer in Hatton, in the late evening.

In Nallathanniya, things started looking up. Even though I had arrived quite late, delicious home cooked food was served and my lungs were filled with a fresh mountain breeze. I had to get some sleep quick as I was joining another group of travellers hiking up Adam’s Peak that same night. We departed at 1.30am and it became slowly evident that we were not the only ones going up. It became so crowded that we could literally not move for hours. Squashed by various other travellers, I briefly considered going back to sleep again while standing up. I would not have been able to fall. Heck, the crowd might have even moved me up and I’d wake up at the top, refreshed.

Eventually we found a less crowded shortcut and made it just in time for the sunrise, which happened to be completely obscured by clouds. Still an unforgettable experience – in the literal sense of the word – to be alongside this vast amount of people, all trying to do the same thing: going up.

The next day our host gave us a tip to go see a few waterfalls at the Maussakelle Reservoir, only a short drive away from the guesthouse. I wasn’t quite prepared for what followed: Two epic waterfalls in complete isolation and deprived of any human activity, yet only a stone throw away from the overcrowded hike the night before.

Gartmore falls (left) and Moray falls (right) at Maussakelle Reservoir, which is created by the Maskeliya Dam.

The Moray falls from above at the Maussakelle Reservoir. The water originates from the Samanala Mountain Range further south.

Being impressed with the serenity of the reservoir, I decided to go back the next day on foot so that I could take my time and take photos along the way.

I passed one after the other tea plantation where workers were picking leaves. Sri Lanka is the third largest exporter of tea, after China and Kenya, of which Ceylon tea is the top agriculture export in the whole of Sri Lanka.

A worker carries bags of Ceylon tea leaves on a tea plantation in Mulgama, Sri Lanka.

A woman stops for a photo on my way to the Moray falls through various Ceylon tea plantations.

The train from Hatton to Ella

I received a lift from the guesthouse in Nallathanniya back to Hatton where I had to wait for the train to Ella. This train, which departs from Kandy (a bit further north), is famous for its superb scenic views as well as its dangling tourists. Doors on this train, well at least the closure of them, are optional.

A child looks up in a crowded train from Hatton to Ella in Sri Lanka.

A tall forest alongside the train tracks is covered in clouds.

Views in this country town are stunning and I was once again spoiled with home cooked food at my slightly out of the way guesthouse. Out of the way from town I should say, not quite out of the way from the road that leads to Little Adam’s peak; a smaller version of the Adam’s peak near Nallathanniya. From here, Ella Rock (1319m) is clearly visible as well as other impressive hills and waterfalls.

From Ella I took the bus to Monaragala, where I had to transfer to another bus to go to Pottuvil on the east coast and from there I could take a tuk tuk down to Arugam Bay. Arugam Bay is usually a destination for surfers, but also serves as a gateway to the Kumana National Park, one of Sri Lanka’s major national parks.

At my guesthouse, I was welcomed by a friendly young man who told me he had only just started running the accommodation. To get to my little hut, I had to wheel my bag over a path made out of beach sand. As I looked down I was quite impressed by how smooth it was. It turns out that smooth beach sand comes with a price. When I looked back, the host was frantically erasing the tracks my wheels had made. I wasn’t the only one creating tracks throughout my stay, there were others. And sand combing was all I saw him do for the rest of my stay.

Kumana National Park is contiguous with Yala National Park. Both located on the south eastern corner of Sri Lanka, Yala is on the left side and Kumana on the right. However, Yala is located more closely to the touristy south of Sri Lanka and therefore a lot more likely to have plenty of visitors.

A Sri Lankan elephant (Elephas maximus maximus), native to Sri Lanka, is having an early morning breakfast of lotus flowers.

As a type of symbiotic relationship, egrets follow water buffalos and eat the flies and bugs of their skin. The movement of the foraging buffalos also dislodges various insects from the field.

The Blue-tailed Bee-eaters are the largest amongst the Bee-eaters and also one of the prettiest.

A Sri Lankan elephant shakes off the egrets that were sitting on his back.

A wild pig rubs his or her tummy over a branch in Kumana National Park, Sri Lanka.

A close-up of a Sri Lankan elephant in Kumana National Park, Sri Lanka.

A Sri Lankan elephant swipes his or her feet over the ground to remove the leaves, branches and grass that he or she doesn’t want, causing dust to rise.

It seemed like my guide and me were the only humans in the entire park. The one time other people joined us was when we were watching a leopard in the distance casually walk over to a tree, while scaring the bejeebers out of a peacock. Unfortunately, too far to take any good photos.

Back in Arugam Bay, the beach was sprawling with local activity. Fishermen were offloading their catch and fully dressed locals were taking a dip.

While looking at the map, it seemed like I could continue my way down along the coast from Kumana, into Yala, and continue my circuit around the south of Sri Lanka. I was wrong, there was no road connecting Kumana and Yala. I had to go back up to Arugam Bay and from there retrace my steps all the way back to Monaragala and Wellawaya before I could go down south again.

Luckily, it was possible to do it all in a day and I arrived in Tangalle in the evening.

A dog hides under shade of an oruwa fishing catamaran, or a traditional Sri Lankan fishing boat.

A tuktuk parked in a small lane in Tangelle, Sri Lanka

Heading into popular territory, the beaches in Mirissa are packed with bars, restaurants and clubs. Apparently the clubs take turns being the place where everyone should go in the later hours of the night. They show this by lighting up fireworks just before it starts, so that partygoers know where to go.

There are also some natural gems, though still popular with tourists, such as a tiny, rocky peninsula which is scattered with tall palm trees.

Surfers are waiting for the perfect wave near Mirissa Beach, Sri Lanka.

Coconut Hill from above at Mirissa, Sri Lanka.

Mirissa Beach from above, Sri Lanka.

Just a little bit further east of Mirissa lays Weligama, which means “Sandy Village”. It is more of a blend between beach town and fishing hub.

Weligama Fishermans Village Beach from above in Weligama, Sri Lanka.

A jetty near Fishermans Village Beach from above in Weligama, Sri Lanka.

A tiny island in front of Ahangama Beach, Sri Lanka.

In Koggala, several stilts rise up from the coastal waters. The fishermen sit on a cross bar, the ‘petta’, which is tied to a vertical pole. From here, the fishermen cast their lines and wait until a fish comes along.

This method of fishing is unique to Sri Lanka and can be witnessed in places such as Koggala, Ahangama, Welipenna and Thalarambe.

According to the fishermen I photographed, the stilt fishermen at Koggala can catch between the 10 and 20 fish a day during the fishing season, which they can then sell for only a couple of rupees each. This is quite a contrast compared to the money they could make from visiting tourists who could pay anywhere between 1000 and 4000 rupees for a photo session, depending on the number of fishermen and the negotiating tactics of the photographer.

As the trip from west to east took a large chunk of my time, the journey back to Colombo from Arugam Bay via the southern beaches had to be swift. Arriving back in Colombo, I could sense that the atmosphere was changing fast too.

There were long queues at every petrol station I saw, as the government did not have the required dollars to pay for the two ships loaded with fuel supplies that were waiting to dock. I could sense from the tuk tuk drivers that people were struggling and angry. A terrorist attack in 2019 and then COVID had stopped many tourists from visiting and was pretty bad news for the many livelihoods who depend on this industry.

Since then, the protests had intensified and the president has fled the country. However, this shouldn’t distract from the fact that Sri Lanka is still a fantastic country to visit. I know I can’t wait to go back. I heard the northern side is beautiful too.