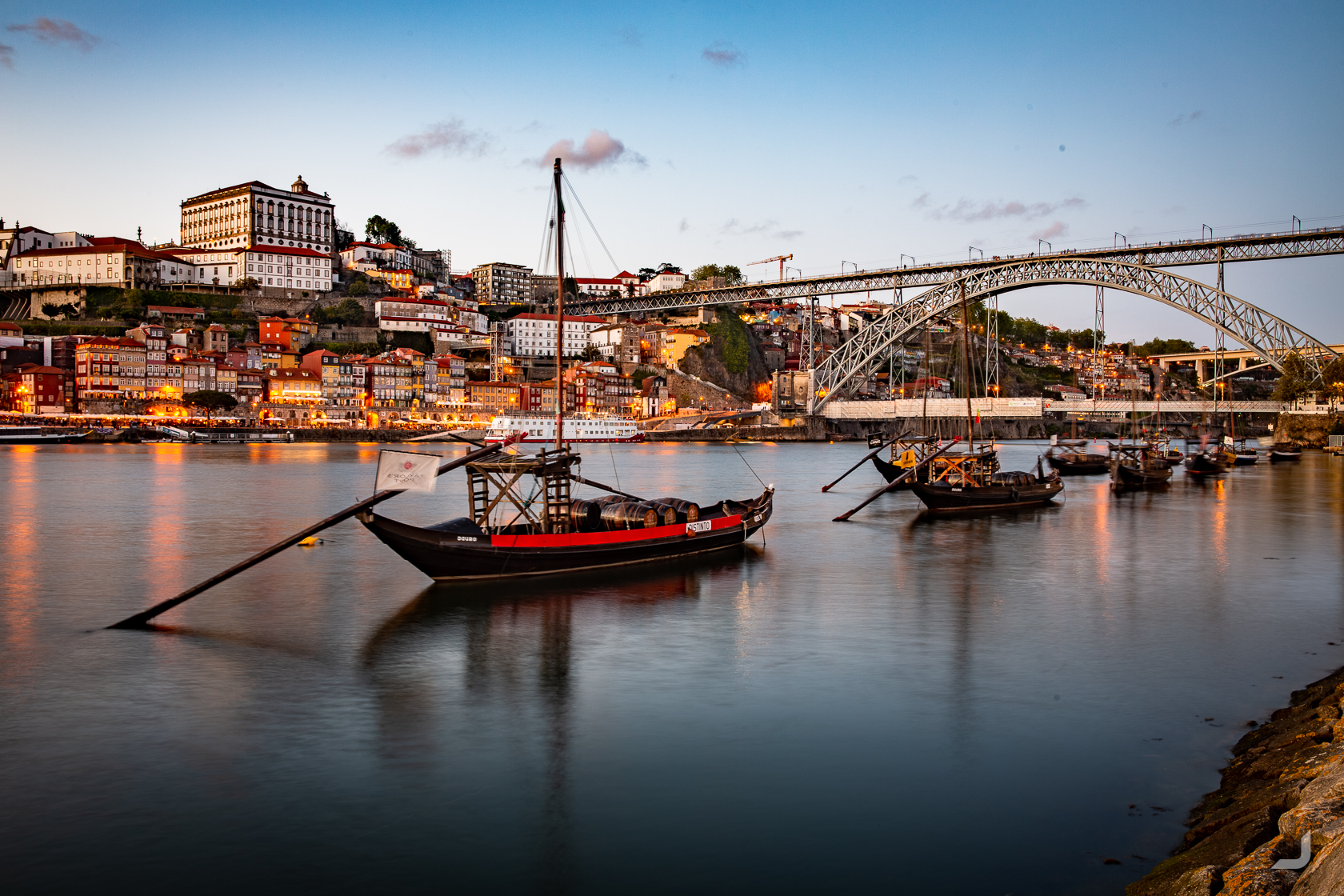 Europe is big. Even though I grew up there, getting around was quite expensive as a child and then still so as a student. Having a break in between jobs this time around made me feel like I could actually spend a bit of money and go and see things.

I’ve always want to visit more of the eastern side of the Mediterranean, like Cyprus, Turkey and Jordan. Another option was to go and see Portugal, it was closer and I could maybe even make my way back to the Netherlands overland.

I already had a flight booked to South Africa a couple of weeks later to visit the same place where I had volunteered 16 years ago. Then, while sitting in a random cafe in The Netherlands with my family, I saw a wine flyer which had a bottle of wine from South Africa. I picked it up, turned it around and there was a bottle of wine from Portugal. The flyer had decided.

The Algarve is Portugal’s most southern region and is marked by a 155 kilometre coastline with cliffs that can reach as high as 20 meters.

I started my journey by taking the train from Faro in the south east to Lagos in the south west. I bought a ticket through a local CP app which shows timetables and allows for booking tickets. After purchasing a ticket, it shows a QR code which I assumed had to be shown to the conductor. However, when I tried to show this on the train to a conductor he pointed at his groin and said that he wasn’t going to show his *** either and that I was also not going to show him my passport. It turns out that all he wanted to hear was my name.

I arrived in Lagos in the late evening but still just in time to catch the sun setting behind the cliffs.

The sun sets behind the limestone cliffs alongside the Fisherman’s trail in Lagos, Portugal.

The Mesozoic sedimentary rocks and limestone cliffs are roughly 251 million years old and are constantly being eroded by the sea, turning into remarkable pillars and structures.

A boat passes the cliffs in Lagos, Portugal.

Millions of years of erosion have turned some limestone cliffs into pillars in Lagos, Portugal.

When the water keeps carving out the limestone from below, it can create impressive holes such as these at Praia da Balança, Portugal.

Praia do Barranco do Martinho, located along the south end of Lagos, Portugal.

A large hole in a limestone cliff, carved out by erosion, at Praia da Balança in Lagos, Portugal.

A bit further east from Lagos, lays a small fishing town called Alvor. When I walked down to the beach I bumped into another stretch of rugged Mesozoic sedimentary rocks and limestone cliffs, which are still constantly being shaped by the Atlantic ocean today.

One triangular shaped cave after the other near Praia da Prainha in Alvor, Portugal.

A man walks through a cave in one of the limestone rocks at Praia da Prainha in Alvor, Portugal.

A man walks along Praia da Prainha in Alvor, Portugal.

Erosion has created a fully enclosed beach at Prainha in Alvor, Portugal.

When I saw a picture on the internet of a particular cave at Benagil I knew I had to make a stop there. Arriving late in the afternoon it was already too late to explore this particular cave but I thought I’d go for a walk along the coast anyway. Little did I know that I was going to drop my camera with tripod and all of the cliff.

The view at Praia da Mesquita, Lagoa, Portugal. It is also the last photo I took before I nearly lost my camera.

Spoiler alert: through a tiny miracle in the form of two helpful people I managed to get the camera back. However, I was so shaken by the whole affair that I didn’t return to the Benagil cave the next day to take the photo I actually came for.

At the hostel in Faro, a local guide enthusiastically informed me about a website called DriiveMe where I could allegedly rent a car for several days for only 1 euro. I was told that the only catch is that I need to take it from one city to another within a certain amount of days. When I checked the website, I did find a camper van for only 1 euro that could take me from Faro to Porto and it looked like it was available for 7 days. This seemed perfect and I booked it right away.

However, there were a couple more of these catches that I only found about out later. It turned out that I couldn’t have the van for 7 days (that was only the period the deal was available for) but only for 3 days (which had to be within these 7 days). I was also bound to a very tight kilometre range and anything above that had a ridiculously high price tag per kilometre. Vans are also not that easy to navigate along the narrow streets of tiny Portuguese villages and this was one of the biggest vans I had ever seen. Finally, as it turns out (for me at least), vans are petrol monsters. So all in all, it wasn’t the best decision when you’re traveling solo.

However, the west coast of the southern part of Portugal is stunning and well worth a visit. Perhaps without the dramatic small inlets and carefully carved out caves and other geographical features from the south coast, but still with impressive views and spectacular cliffs. Less developed, it also comes without the crowds that typically come with the sun soaked southern beaches.

White storks on their nests alongside the striking coast near Praia do Carvalhal at the west coast of Portugal.

White storks can reach a size of 1.15 meters in height and 2 meters in wingspan, which makes them one of the largest wading birds in the world.

These storks made their nests, which can weigh several hundred kilos and measure up to 2 meters high on a ridge near Praia do Carvalhal, Portugal.

My welcome in Porto wasn’t very warm unfortunately. Some residents in my building made this clear by leaving some sort of faeces on my door handle. It got me quite occupied with thinking what I could’ve done wrong, and I’ve settled on that I might’ve let the corridor door close a little too loudly by itself.

The city, however, is absolutely gorgeous and is full of character, texture and colour.

The colourful facade alongside Cais da Estiva in Porto, Portugal.

The Dom Luís I Bridge connects Porto and Vila Nova de Gaia in Portugal and was designed by Théophile Seyrig, who had founded “Eiffel and Company” together with Gustave Eiffel, but later became his competition.

The Dom Luís I Bridge spans the Douro river in Porto, Portugal.

Coming from Faro, I initially had to skip Lisbon (or Lisboa in Portugese) because the van had to be returned within 3 days. However, I had heard too many great things about the capital, so I took the train back down.

One of the attractions is the Saint George’s Castle, which overlooks the ancient city. According to Wikipedia, human occupation of the castle hill dates to at least the 8th century BC and it has served as the location of fortification of many different empires.

Looking out over the city of Lisbon from one of the windows inside the Saint George’s Castle.

Lisbon at sunset from the castle walls of the Saint George’s Castle.

The Remodelado trams are a famous feature of the inner streets of Lisbon and have been rattling and screeching since 1873. Because Lisbon’s hills are steep and narrow, modern trams can’t be used on most routes.

Since my flight was leaving from Porto, I returned from Lisbon and had a few more days left in one of Europe’s oldest city centres.

A panorama of Porto clearly shows (from left to right) the Porto Cathedral, the Episcopal Palace of Porto, the Dom Luís I Bridge and the Monastery of Serra do Pilar.

These Rabelo boats are traditional Portuguese cargo boats that were originally used to transport the barrels of Port wine from the wine cellars in Vila Nova de Gaia to Porto on the other side of the Douro river. The “Port” name is protected and can only be used by wine manufacturers (and there are quite a few of them) in Porto.

A long exposure of Cais das Pedras at night in Porto, Portugal.

Before I arrived in Faro, I thought I could always make my way back up to The Netherlands if I had planned too much time for Portugal. However, I could not have been more wrong. Out of these 20 days, I barely had enough time to make it from one end to the other. There truly is so much more to see than my ignorant self originally thought (as it is usually the case).

So my two cents in a 🥜🐚: check out the coast (anywhere) and order the sea bass (if you eat fish). At least, until I finally get to make it to any of the beautiful places inland.