Skip to main content
Close Search
What the flip

How gravity nearly ate my camera (and tripod) 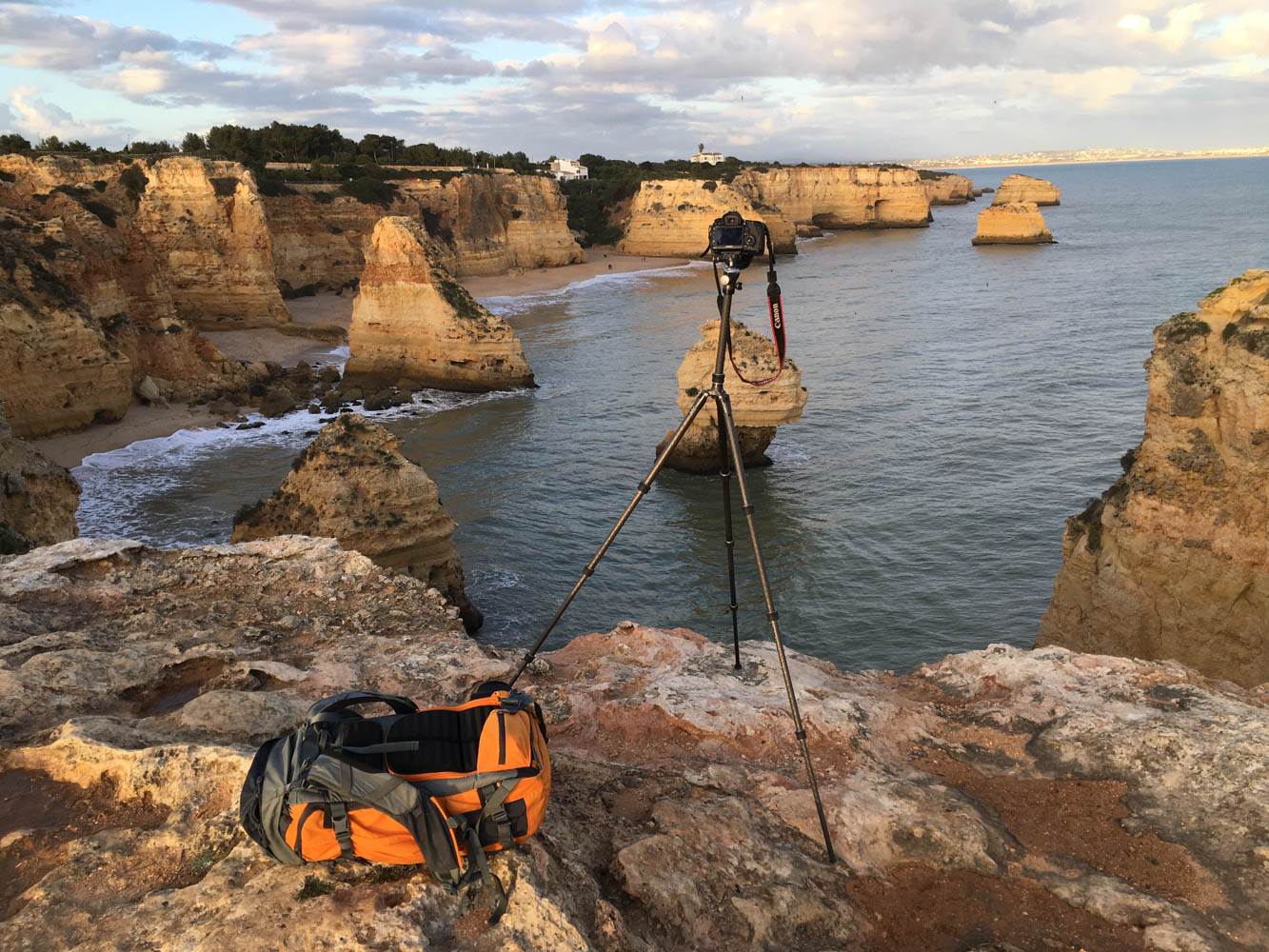 Benagil is a narrow coastal area famous for some impressive cliff formations along the Algarve in the south of Portugal. One beach in particular, the Algar de Benagil, is a gem for photographers as it is covered by a cave but still gets sunlight through a large circular opening in the ceiling. Though you’d have to cross water to get to it.

Because I arrived in the late afternoon, the kayak company was already closed. So I decided to explore the coast by foot instead and leave the Algar de Benagil beach for the next day. After an hour of walking or so, a wide scenic view opened up looking over the cliffs alongside Marinha Beach. It looked like the perfect spot for a picture.

As I placed the camera with tripod quite close to the edge of the cliff,  I thought I’d double check the stability. One leg forward and two legs back, making the chance it could fall forward as small as possible.

In the meantime, I saw a couple to my right taking photos of each other thinking they were dangerously close to the edge.

After I was finished, I picked up the camera with the tripod and started walking backwards, away from the cliff. While I was walking back, it occurred to me that I should take a quick photo of the camera in front of the view (for a site hero shot) so I placed it back down. I noticed immediately that it wasn’t that stable, but I thought I’d be far away enough from the edge and taking a few pics would only last a couple of seconds.

So I stepped back further away from the camera and took out my phone to take a panorama. I slowly moved my phone from the left to the right and just when I was about to see the camera: *woosh*. The camera fell forward, the tripod legs flew up in the air and down the cliff it went.

A few tripod legs can still be seen before I moved the phone down (while taking the panorama).

Okay.. my camera just fell off the cliff. With my tripod. Did this really happen?

I looked at the couple who were taking photos of each other earlier. Did they see it? They looked at me and started walking closer. The girl pointed at the edge so I got on the floor and crawled over. And there it was, my camera and tripod hanging on a tiny branch 5-6 meters down the cliff. If it had fallen a few centimetres to the left – or right – it would’ve been crushed by the rocks and swallowed by the sea. One tiny little branch was keeping it from certain death. I had no idea how long this branch would hold, nor how on earth I could get it back.

The guy from the couple, Roberto, was Spanish and the girl, Natalia, was Colombian. Roberto couldn’t speak English but Natalia could. Roberto said something in Spanish which Natalia translated: “Wait here, we’ll go to the car to find a rope”. Okay, I replied. “I’ll wait right here”.

While they were gone I had plenty of time to think about what just had happened: and quite a few angles to inspect the hanging camera from. What if it falls? Should I take a picture with my phone? I don’t want to jinx it. What if I drop my phone? Or what if it falls right when I take the photo? But then what if they don’t come back? Maybe I should just take a photo for the police or insurance.. Alright then.

And one from the left side..

And one from above..

They did come back, and they were carrying a 4-5 meter long pole made from individual tent sticks duck-taped together. At the end they had taped a hook. Roberto looked for a v-shaped branch to also tape at the end, which he thought we could wiggle underneath the tripod. He took another look at the distance and decided to attach two more tent poles. He also had a piece of string which he tied to the top end just in case we dropped the pole. He handed me the stick with a smile and said “ok, here you go”. “Alright”, I smiled back. I took a deep breath and started crawling towards the brittle edge. I asked Roberto to sit on my legs just in case. I hung over the cliff and tried to keep my focus on nothing but the camera. I slowly lowered the pole and I could only just reach the top. Meanwhile more people had gathered around and I could see flashes from cameras in the back corners of my eyes. For a moment I felt like a movie star. Like freaking Tom Cruise.

I tried to wiggle the hook underneath the strap. I finally got it underneath, pulled it up a tiny bit and started twisting it, so it’ll be harder to fall off the hook. At any moment the tape could fail. After I thought I had a decent grip, the branch didn’t want to let go. All I could do was wiggle, until it finally came loose.

Slowly and bit by bit I pulled up the camera with its tripod still attached, until I had it in my hands. I couldn’t believe I had it back, it was a little dusty, but it was all fine. Natalia started clapping,

I asked them again whether we should swap numbers so that I can honestly treat them for something. They answered: “No thank you, it’s alright”, and they left. I was done with taking photos for that night and still look at my camera with gratitude.

Did I miss a memo?