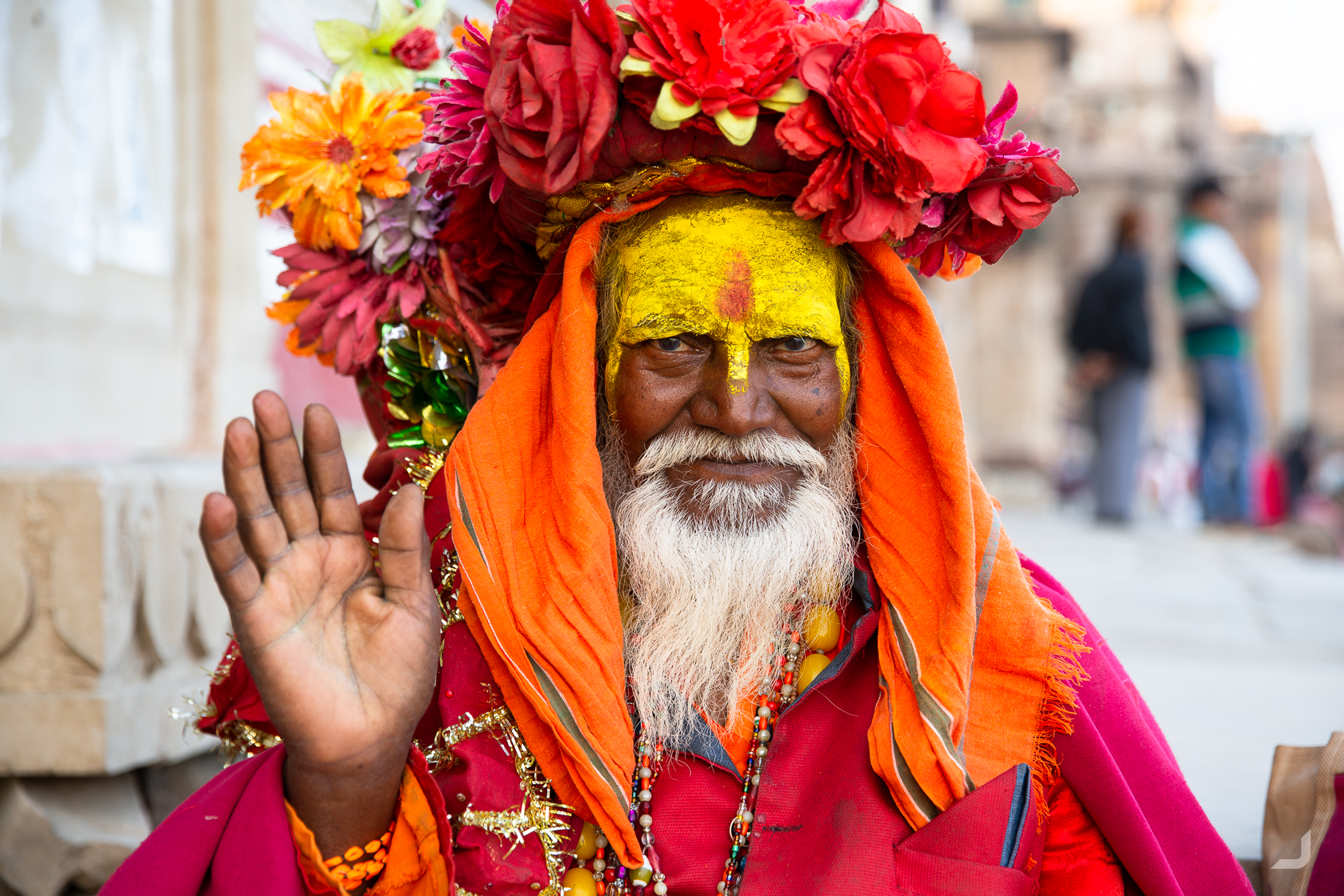 When the opportunity came up to attend an Indian wedding in Kolkatta, India, it was hard to say no. Indian weddings can last for several days and often feature a lot of dancing, beautiful attires, horses, palanquins and fireworks.

This particular wedding was in the county of Howra, where Olena from Ukraine and Ankit from India would say their vows. The venue, Lake Land Country Club, represented a walled mini-town that contained several beautifully fairy lit buildings (for several weddings) as well as the apartments that would serve as our accommodation.

Outside of those gates, the India I had imagined with its unmatched mixture of people, traffic, colours, scents and relentless activity was waiting to be unraveled. I couldn’t wait to attend the wedding, but I also couldn’t wait to start exploring the world beyond those gates.

However, before I could attend anything, I had to go shopping to buy a kurta, the traditional Indian shirt worn at ceremonies and other formal events.

A Hindu Wedding in Kolkata

The sangeet is traditionally the “warm up” party that is held on the first night. Live, mostly dance, performances from friends and family were stitched together by mc’s and there was a large buffet serving a variety of Indian dishes and non-alcoholic drinks. Towards the end of the night, I discovered that there was actually an alcohol table too, but it was hidden and largely occupied by chitchatting elderly men.

The second night started off with a procession party (baraat). In this party, the groom makes his way to the venue while mounted on a horse and being surrounded by family members and friends dancing to the music from a marching band, or baja.

Ankit rides a horse in the baraat under the sound of fireworks and drums of the baja.

Arriving to the venue in a palanquin, Olena meets Ankit for the jai mala, an exchange of garlands (or mala). While both the bride and the groom were lifted in the air by their relatives, one after the other reached out to place the string of flowers over their heads.

Ankit and Olena exchange mala, or flowers bunched together on a string, to profess acceptance and union.

The exchange of these flowers, also known as varmala, represents acceptance and union.

The exchange of garlands is sealed with an eruption of colourful rose petals and confetti.

Family members remove some of the rose petals that were left behind.

After Varmala, the couple went onto a stage to accept blessings and gifts from their guests. And that was it, or at least that’s what we thought. As we were about to leave the building we were told that they weren’t actually married yet. That would happen after midnight in the mandap, a wooden stage surrounded by four pillars, in which the actual ceremony takes place.

Close relatives witness the ceremony from just outside of the mandap.

The ceremony commenced at 1.30am in the morning, which together with the date, was determined and set by the priest.

Ankit and Olena are “feeding the fire” with rice in a ritual called the Laaja Homam, which roughly translates to “the offering of puffed rice to the sacred fire”. They circle seven times around the fire while Olena’s friend sprinkles the rice through their hands, which is traditionally done by the bride’s brother.

Olena holds a Sindoora, which contains the sindoor, the red/orange powder that married Hindu women wear at the parting of their hair to indicate that they are married.

Ankit applies sindoor to Olena’s forehead, the mark of a married woman in Hinduism.

By the time I took my last photo I could barely keep my eyes open. As much as this was a golden opportunity to learn more about a Hindu wedding and to document it in pictures from up close, the jetlag was taking its inevitable toll. The night marked the end of the wedding and the time had come to kickstart the rest of the India adventure. If you’re interested in seeing more images of the wedding, I’ve placed them in the Ankit & Olena wedding post.

We had one more day to explore the city of Kolkata, India’s third largest city and located in the far east of this enormous country. It kept true to the usual expected nuisances of high density cities, such as traffic moving at glacier speeds and chaotic and continuous movement of people, but there was a gentler feel to it than I had feared (coming to India for the first time). Kolkata used to be the former capital of British India, with the colossal Victoria Memorial being one of the extravagant remnants of this era. The city also has a colourful flower market and it has some interesting zebra crossings.

Picture being welcomed by a continuous flow of festival sized crowds making their way through narrow streets, with motorbikes, tuk-tuks and trucks swarming through, while not being able to stand still as either you’d be in someone’s way or you’d have to respond to why you don’t really need a tuk-tuk right now. Now add to the soundtrack that some of these trucks have stacked up towers of speakers and lights that play deafening trance-like music to an enthusiastic group of dancers who are following closely behind these portable al fresco discos. Then also add some random punches in the face of truck drivers by other truck drivers for some extra flare. Welcome to Varanasi, the religious capital of India. It is on many levels, truly another level.

As the lanes towards the banks of the Ganges river become smaller and narrower, the loud traffic noises become quieter and the bins become holier. The long stretch of walkway alongside of the river is divided into sections or ghats. Ghat literally means “stairs” and each of these leads down to the water of the Ganges river that is considered sacred in Hindu culture. Hindus believe that bathing in this river helps the remission of sins and that dying and getting cremated along the banks facilitates Moksha, which is the liberation from the cycle of life and death..

A Hindu lady holds multiple drapes after having washed them in the Ganges river.

The ghats are a world of its own, where getting lost in the art of people watching quickly becomes as essential as the breathing of the hazy air. The sheer history of the place becomes a mere abstract evocation next to the history that can be witnessed directly off people’s faces. Near every person looks like a character summoned from a book that I’d be desperate to read.

Priests overlooking the Ganges river at the Shivala Ghat.

A Hindu priest poses for the camera (in exchange for 20 rupee, which translates to roughly 40 cents in Australian dollars).

Along some of these ghats, daily aarti are held which are the offerings of prayers to the Ganges river by local priests. They are held either at dawn or at dusk and can attract crowds of hundreds of people.

Priests are performing a ritual of offering prayer to the Ganges river, or aarti, at Dashashwamedh Ghat which is the main ghat in Varanasi.

Priests circle deepam, or oil lamps, in their prayers to the Ganges river. The fire is used as a link between this world and the spirit world.

Dancers perform inside the Brijrama Palace at the Darbhanga Ghat.

Aarti performed at dawn at the Assi Ghat, the most southern ghat in Varanasi.

Priests circle deepam as part of their aarti.

Priests face the Ganges river while performing their aarti.

Walking alongside the ghats, the amount of touts offering boat rides (by means of one simple but affective word in question form: “boat?”) might give the impression that this industry pretty much is the local Ganges economy. Touts hassle anyone suspected of being able to pay for them and services can range from scenic rides to ferrying passengers across to the other side.

The banks of the Ganges river at dawn, taken from the Assi Ghat.

Parked boats alongside the Ganges river at sunrise. Some locals try to earn a bit of extra money ferrying people back and forth using these boats.

Preparing for prayers alongside the Ganges river.

Monks walk up to a monastery alongside the ghat.

Women bath in the Ganges river, which is considered pure and liberates from the cycle of life and death in Hindu culture.

A salesman tries to sell necklaces to tourists visiting the Panna Tiger Reserve.

Although no tigers could be spotted, vultures were present in abundance.

Okay fine, you probably don’t care about those vultures. So what you are probably really wondering is what kind of sculptures were carved out on those temples already.

The carvings are renowned for displaying mostly women dressed in wet sarees and virile men in the most imaginative positions in pairs, threesomes and many moresomes otherwise known as mithunas. The majority of carvings are actually of mundane activities of life, but apparently these don’t attract as much fame.

Only 25 of the originally 85 temples remain today and were built by the Chandela dynasty between AD 930 and 1050. Many were destroyed after the Chandelas were defeated by the Delhi Sultanate in the 13th century.

The Kandariya Mahadeva temple was built in 1029 and is the largest temple of the complex.

Local women are weeding the grass at the Western Group of the Khajuraho temples.

In the rest of the small Khajuraho town, maze like streets with photogenic opportunities in every corner were patiently waiting to be revealed.

Passing by this homely scene, the gentleman sitting on his doorstep sent a welcoming smile. He was one of the few in the neighbourhood to allow photographs to be taken.

Visiting the last of the four places and for one day only. Mumbai is India’s financial powerhouse, home to Asia’s biggest slums as well as the world’s most expensive house. Looking for a specific gift shop (one that returns profits to local communities, similar to Fair Photo) brought me to a few small and hidden lanes along the coast.

A Hindu lady binds flowers in one of the lanes surrounding the Mahalakshmi temple in Mumbai.

Awaiting my ride back to the hotel, I bumped into the sight of the Haji Ali Dargah mosque at sunset.

In short, the time I had in India was.. too short. India is a massive country that deserves a proper visit. Just these 12 days and four cities merely scratch the surface and could barely do it justice.

India had always been on the bottom of my list of places where I wanted to go. I was afraid of the Delhi belly, the chaos, the safety, the intensity, the culture shock and so on. If it wasn’t for the wedding opportunity, it would have probably stayed this way.

I did get the Delhi belly in the end, and I was shocked by the chaos and the intensity. But the reward of crossing paths with those hidden beautiful strangers who had carried such a distinctively and visibly different history than me, had become a risk worthwhile taking. No longer is India at the bottom of my list, it had eagerly crawled itself up to be amongst the top, and rightly so.